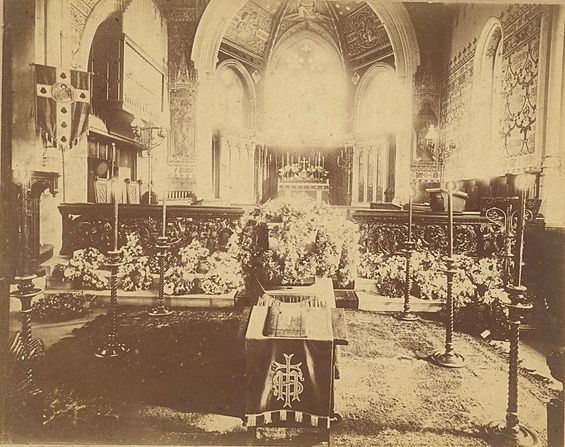 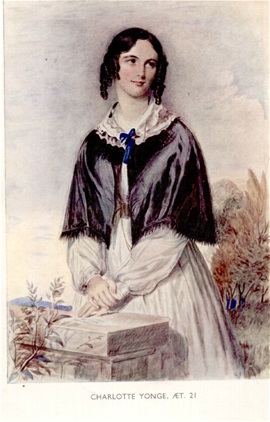 Charlotte Mary Yonge was born on August 11th 1823 at Otterbourne House, Otterbourne near Winchester in the county of Hampshire, where her parents lived with her grandmother. The small estate gave her father a comfortable but not luxurious living.  Her father William, who came from the old Devon family, had been brought up at Cornwood, a few miles from the family seat of Puslinch, some seven miles south east of Plymouth. He was in the 52nd regiment at Waterloo, a fact which was always a source of pride to Charlotte.

In 1822 he married Fanny Bargus, a shy retiring woman. By all accounts they were a devoted couple. Charlotte was the first of their two children.

Having been forced to live the life of a country gentleman, for his mother in law had made him give up the army, he had plenty of time on his hands and decided to be Charlotte's teacher. William was in favour of education for women but only in the home.

Charlotte wote, "My father undertook to teach me writing. He made me write without resting finger, wrist or even arm. .... I shed many tears over the process but I gained much ease from it and even now I feel the benefit in the manner of holding pen and hand, which saves me much cramping and fatigue. From that time [about 1830 when her brother was born and Charlotte was aged seven] he began to teach me some part of my studies. He was the most exact of teachers and required attention and accuracy, growing rather hot and loud when he did not meet it, but rewarding real pains with approval that was to me always the sweetest of pleasures.... but I always loved and never feared my work with him."

Her childhood was Spartan but appeared to be happy. She once wrote that her childhood was "an intensely happy one". Fed on a very simple diet she denounced the deceit of a housemaid, who taking pity on her gave her some bread with butter on it.

Her father’s interest in the church and education had an early and deep effect on Charlotte and much of her life was devoted to these two topics. When she was only seven she began to teach in the local Sunday school, a task that she continued for seventy one years.

Brought up on the most rigid of high Tory principles she once wrote " It gave me a great moral shock when I first found that a radical could be a good person".

In many ways Charlotte was like her mother who was both intelligent and painfully shy. Both these characteristics were accentuated by Charlotte’s intense but private education and grew more pronounced as she grew older. As a result she did not relate easily to other children and the world outside her home. It is said that she never learnt the facts of life although in none of her novels do the characters children arrive earlier than they should!

When Charlotte was twelve she came under the influence of John Keble, the leader of the Oxford movement. The Oxford movement was a powerful force in the revival of the Church of England, which laid great a stress on the Catholic side of the church. .

Keble had been appointed to Charlotte’s local church and it was this, which allowed Keble to influence Charlotte to follow the high church way, for the rest of her life.. In later life Charlotte wrote a tract explaining why she was a Catholic but not a Roman Catholic.

John Keble was one of the first to recognise and encourage her literary talent. It was he told her it was a gift of God and that she could best bring people to God by writing novels, which could convey the Christian message in an easily assimilated way.

Her first "published" work appeared when she was only fifteen. It was called "The CHATEAU DE MELVILLE.”. The proceeds went to support the village school.

Charlotte’s immediate family did not at first approve of her becoming a full time writer; the objection was on religious and social grounds with a strong feeling that it was just not ladylike. However a compromise was arrived at whereby Charlotte could write but any income would go to good causes. This edict probably fitted in with Charlotte’s own wishes. Her grandmother, who really ruled the family home and was especially adamant that it was wrong for a lady to profit by the fruit of her own labours.

In later life a friend asked Charlotte what she would have done had her family forbidden her to publish her works. The reply was characteristic of a born writer "Oh I must have written but I should not have published - at least not for many years".

However it was in the years 1853-1856 that Charlotte enjoyed her greatest success. This was the novel THE HEIR OF REDCLYFFE, which was also her first book to appear in her own name. It was a book, which made her reputation. It continued to be in popular demand for well over twenty years. Indeed for a time it was the most popular novel of the century surpassing in popularity the works of Dickens and Thackeray. It was especially popular with army officers in the Crimea. The profits from the book enabled Charlotte to pay for the fitting out of a ship for the Melanesian mission. The use of the profits from her books was very important for Charlotte and her family. It made her writing "respectable".

Her two other best known books were HEARTSEASE published in 1854 and the DAISY CHAIN published in 1856. This second book enabled her to finance a missionary college in Auckland New Zealand.

Some of her books have recently been reprinted and second hand copies are easily available.

A number of her letters are at the British Library and even more can be found online. It was for long believed that  many personal letters were burnt by her biographer Christopher Coleridg but now it is thought that they may have survived. The biography which is also party biographical contains many personal and illuminating references to other family members as well as some dubious information about her ancestors.

When her brother Julian married in 1858 Charlotte and her mother moved to a small house, known as of Elderfield which was at the far end of the village of Otterbourne, from Otterbourne House and nearly opposite the church that her father had had built. The house is still thee and is used a half way house by former prisoners

There she tended to become more and more of a recluse and keeping to a way of life unchanged in essentials since her childhood. Believing a woman’s place was in the home she was initially against the education of women in schools "having a decided objection to bringing masses of girls together" but she later changed her mind and in 1899 a scholarship was founded in her honour for girls going to university from WinchesterHigh School.

Her books attracted a wide range of readers from women to soldiers, the latter being some of her greatest admirers. The middle class in Victorian Britain grew rapidly in numbers and respectability and the home was the centre of family life. The cult of the family had an obvious influence on morals but also on literature. The literary form typical of the age was the novel with a good straightforward narrative. Reading aloud to the family circle was common and thus novels had to appeal to all from the child to the grandparent. Charlotte was one of the supreme writers in depicting family life. This spinster daughter of a retired army officer and small squire was an atypical representative her generation and class.

She was a highly educated and intelligent woman but one who had little direct knowledge of life outside her village of Otterbourne. The greater novelists of the day having wider horizons and transcending the limitations of their setting belong to all time. That is why Charlotte is little read today whereas writers such as Dickens and Bronte are still widely read to this day.

In her long life she wrote one hundred and sixty books, including novels, historical works and romances, biographies, children’s books, reference books as well as translating numerous French books.

She died on the 24th March 1901, aged seventy seven, two months after Queen Victoria and was buried in the new church at Otterbourne, on the 29th March 1901. In every sense she was a Victorian.

Thank you for this account of Charlotte M Yonge. I wouldn't say she was a recluse, however, judging by her letters. https://c21ch.newcastle.edu.au/yonge/

Its just so amazing to have this sort of amazing stuff. would love to share this with mates just after mine https://www.goldenbustours.com/new-york-ny-tours/

Hi Ian....Has taken me a while but finally found your website. Brillia...

Michael Thanks. Praise always appreciated! I presume you ar...

I am the Great-Great Grandson of Walter Francis Duke Young. T...

Thank you for this account of Charlotte M Yonge. I wouldn't say sh...